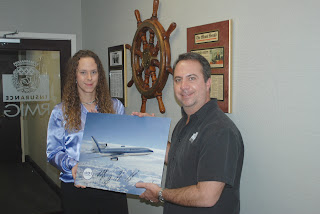 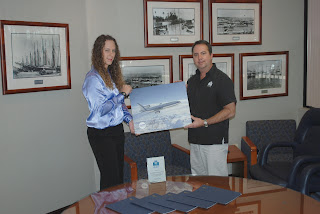 Mr. Jose Bello is shown holding a digital rendering of aircraft N310EA which contains the signatures of the surviving members that make up the Eastern Airlines Flight 401 Tribute Group and of which is being hand delivered by Mr. Bello to Mr. Mamadou Jaye, who was a former Eastern Airlines flight crew member and the Chief Executive Officer of Ceiba Intercontinental S.A., an ATR-72 operator based in Equatorial Guinea in Africa

Doral, Florida 18th January 2010: In a first ever for the Eastern Airlines Flight 401 Tribute, their presence is being personally hand carrier onto the African Continent, particularly into the African nation of Equatorial Guinea. This amazing feat and the assistance to accomplish it is being done by our friends at Royal Marine Insurance Group (RMIG) of Miami, Florida. Headed up by Mrs. Kareen Miller, herself a former Eastern Airline employee, RIMG is a power house aviation and marine insurance company which commands a large market share within South Florida and holds a Global footprint within the industry.

Mr. Jose Bello the Aviation Insurance expert at (RMIG) also a former Eastern Airlines employee is scheduled to travel to Equatorial Guinea on business. He is scheduled to meet with Mr. Mamadou Jaye the Chief Executive Officer of Cebia Intercontinental, S.A., the national airline of Equatorial Guinea. Mr. Jaye, also happens to be a former Eastern Airlines flight crew member and we at the Eastern Flight 401 Tribute Group understands that Mr. Jaye still holds a special place within his heart for Eastern Airlines. Through the gracious efforts of (RMIG) and Jose Bello, the Eastern Airlines Flight 401 Tribute Group, hopes to reach out to Mr. Jaye and Cebia Intercontinental, S.A. an ATR-72 operator for possible support and sponsorship.

The one of a kind survivor signed art print in which Mr. Jaye at Ceiba Intercontinental shall receive will place Mr. Jaye within the ranks with other top aviation professionals who have been honored by the group for their help through the rendering of N310EA, one such recipient is Captain Al Haynes from United Airlines Flight 232 Sioux City, Iowa 1989 crash, the ultimate in Crew Resource Management. This marks the continued global growth of awareness toward the Eastern Airlines Flight 401 Tribute Group. We looked forward to Jose report and photographs from Equatorial Guinea when he meets with Ceiba Intercontinental, S.A.