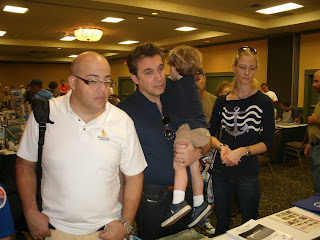 Visitors to the Eastern Airline Flight 401 Tribute Group are grabbed and riveted by the story being told. Shown is a well known and respected world aviation consultant, former Cathay Pacific B747-400 / B777 line pilot and Chairman of InterFlight Consultant Group (IFG) (center) Mr. Oscar Gracia. Oscar is accompany by his Son and Wife who runs and operate a successful Miami based aviation art gallery 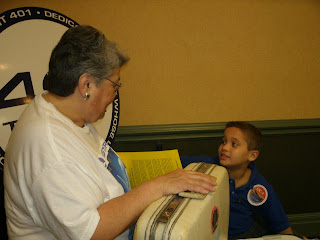 Surviving Flight Attendant Beverly Raposa shares her story with the new generation of aviation enthusiast and very well a future airline / aviation professional. The Eastern Airline Flight 401 story is one that has not age boundary for their audience of interest, both young and old 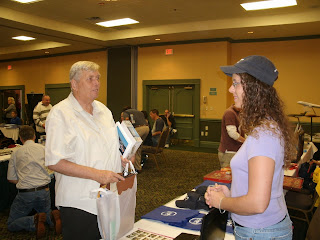 Catherine Smallwood engages in conversation with Mr. Robert Christensen of AIRLINERS Magazine who like the Eastern Flight 401 is also Miami based. AIRLINERS Magazine interest in the history of the crash of Eastern 401 could possibility lead to a series of informative articles within the industry established publication 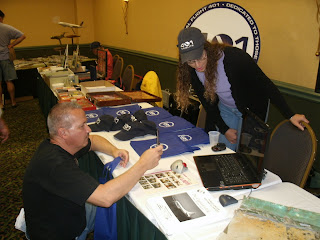 Support group member Catherine Smallwood speaks with Kevin Doran and briefs Kevin the December 29th 2009 "NBC Today Show" news airing of the Flight 401 Story.
Miami, Florida 16th January 2010: Despite the cold snap that besieged Miami since the start of the New Year, finally warmer weather prevailed and made for a great day for enthusiast, historians and fans of commercial aviation, airliners and aircraft's to come out and enjoy the 2010 Miami Airliner Collectibles Show and Conference presented and organized by Air72.
This event adds to the Eastern Airlines Flight 401 Tribute Group second speaking /presentation engagement so far this year. To date, this event marks a milestone in the group effort, as it marks the group fifth public event in reaching out to the aviation community, so as to be known for the effort that is being put forth, so as to establish a memorial to the lost of Eastern Flight 401.
The group as always made a profound presence and impact to those who met with them at their presentation table, as well as to the rows of the seated audience at their main presentation later that night. As always, the attending public, both young and old, seasoned aviation profession or enthusiast are captured by the story of Flight 401.
As the story is told by the surviving members of the Eastern Flight 401 Tribute Group and the myths and stories that have wrapped this event in commercial aviation are dismissed and the facts are brought forth, the public is both amazed and touched by the power that is the human spirit. The Eastern Airlines Flight 401 Tribute Group would like to extend a special thanks and recognition to Mr and Mrs Chuck Padolsky of Naples, Florida for the generous contribution.
Posted by EAL FLt 401 Tribute Group. at 4:03 PM