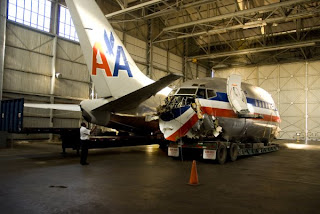 The remaining hulk of what was once aircraft N977AN s/n 29550, as it rest inside a hangar in Jamaica awaiting final scrap disposition by Underwriters 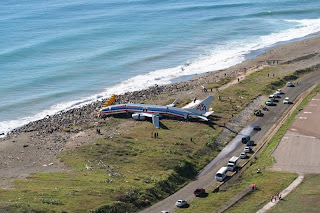 The difference of a mere few more yard who have resulted in the aircraft going into the surf and possibility resulting in death, as then passenger would have had to deal with the crash, darkness and water entry 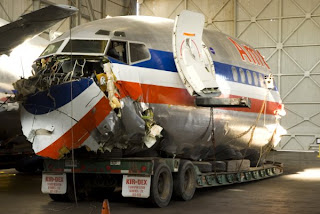 The forward section of aircraft N977AN rest on a transport lorry, the plane classified a total lost by Aviation Insurance Underwriters 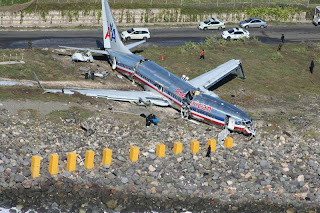 Notice the cured poor measure in which Kingston airport had employed from keeping an aircraft from skidding into the surf at the end of the runway, as evident by the yellow barriers, similar to the D-Day beach obstacle planned by Rommel. The above barrier would result in slicing up a passing fuselage.
Miami, Florida 11th January 2010: 6 days to the date of the 37 anniversary of Eastern Airlines Flight 401 crash into the dark Everglades on 29th December 1972, passenger onboard American Airlines Flight 331 from Miami, Florida to Kingston, Jamaica crashed on a rain soaked runway during the night of 23rd December 2009.
As evident from the above photographs the aircraft a Boeing 737-800, bearing U.S. Registration N977AN, with manufacture serial number 29550, delivered to American Airlines 8 years ago broke up upon crash landing with 140 souls onboard.
But unlike Eastern Airlines Flight 401 the American Airline Cabin crew had one attribute that aided in all souls getting out alive! American 331 flight attendants had cabin flashlights to aid in guiding and seeking the passengers a luxury not afforded to Eastern Airline Flight 401 cabin crew members like Beverly Raposa, Mercy Ruiz and Patty McQuigg on that fateful night.
Aside from establishing Crew Resource Management "CRM" within the industry, the crash of Eastern Airlines 401 also gave and put forth cabin crew emergency flashlights into the passenger cabins.
So next time you fly on a commercial flight anywhere in the world and you glance over at the cabin crew seating stations and see the wall mounted flashlights thank all of those who died and those survived as your chances to survive an evacuation of a dark cabin was in part to Eastern Airlines Flight 401.
Posted by EAL FLt 401 Tribute Group. at 5:47 PM