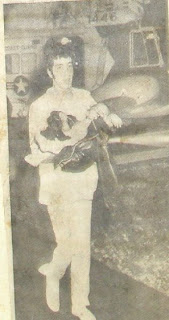 Shown above was then ten month old Baby Miguel Junco being taken by a medic from U.S. Coast Guard HH-52A Helicopter (side / modex No. 1446) to receive medical attention 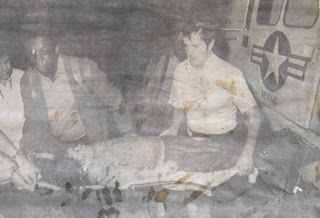 A ten year old boy who survived the crash of Flight 401 is medivac by a U.S. Coast Guard HH-52A (side / modex No. unknown) 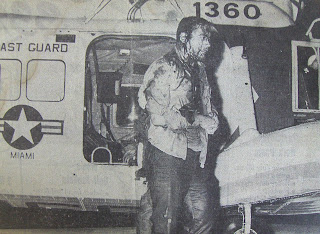 A bleeding survivor walks out from a U.S. Coast Guard HH-52A Helicopter (side / modex No. 1360) at Palmetto Hospital
Opa-Locka, Florida 13th March 2009: The wings of gold, the wings of Naval Aviation played a pivotal role in the rescue of the survivors from the Eastern Flight 401 crash. During the first hours after the crash, rescue efforts were undertaken by the U.S. Coast Guard operating the Sikorsky HH-52A "Sea Guard" Helicopters from the Miami Air Station at Opa Locka Airport (KOPF). The HH-52A's played a significant roll in transporting the rescue teams out to the crash site and ferrying the survivors to Miami for medical attention. Our research of the Miami Herald newspaper archives produced the above photos, which showed two specific HH-52A's from U.S.C.G Miami Air Station, thus numbered as aircraft's 1446 and 1360.
We have established contact with Captain Richard Kenin, the current Commanding Officer at the Miami Coast Guard Air Station. We are seeking to work with Captain Kenin and his staff, so as to hopefully identify and obtain historical information as to the possible other Helicopters and crews who played a major role in the saving of many lives. Tremendous appreciation to the crews, their experience and the leadership of the Miami Coast Guard Air Station on that fateful night. FLY NAVY!
NOTE: Reviewing archived photographs from the Miami Herald Newspaper, a third HH-52A, helicopter was partly identified as taking part in the rescue effort, but the photographed viewed, showed the side number of the aircraft as 1_76, the 2nd digit was obscured by the winch rescue rig mounted unit outside the main cabin door. Therefore, we conclude that so far three HH-52A's took part in the rescue effort.
Posted by EAL FLt 401 Tribute Group. at 1:21 PM