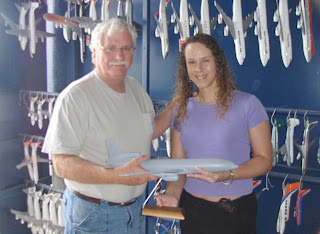 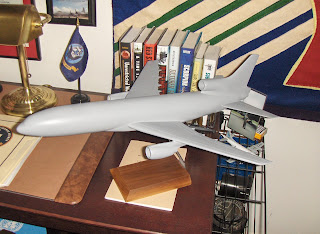 A Lockheed L-1011-100 Resin model in 1/100 scale, which will be transformed into a one of kind art piece by famed Miami Artist George Rodez

Miami, Florida 24th March 2009: An avid supporter of "Miami Aviation" industry known and recognized Atlantic Models comes to the aid of the Eastern Airlines Flight 401 Tribute Group with their generous donation of 1/100 scale model of a Lockheed L-1011 aircraft. Through the talent and effort of famed Miami Artist George Rodez, the donated "unpainted" L-1011 model provided by Atlantic-Models shall become a one of kind special art piece for a fund raising auction.
The proceeds generated from the future auction will go to support the Eastern Airlines Flight 401 Tribute Group. Announcement of the auction shall be posted as soon as the gray L-1011 shown above is transformed into a brilliant and vivid art piece worthy of sitting in a special collection.
The Group is thankful to both Mr. Roger Jarman of Atlantic-Models and Mr. George Rodez, who's shall apply his creative talent to create in what will become a brilliant combination of "Aviation and Art".
Posted by EAL FLt 401 Tribute Group. at 6:06 PM