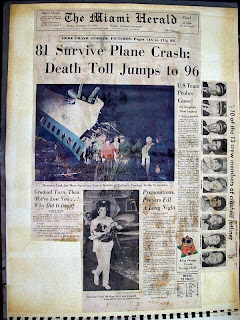 Front Page of the then 30 cents Miami Herald Newspaper, final Sunday December 31st 1972 edition. The Lower picture shows a medic carrying the youngest of the survivors of the flight 401 crash, then ten month Baby Miguel Junco. The child was airlifted from the crash site by a U.S. Coast Guard HH-52A Rescue Helicopter side No. 1446 from the Coast Guard Air Station located at Opa Locka Airport. 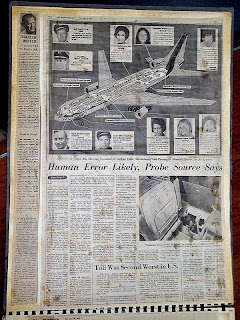 Shown above is a cockpit / cabin layout showing the locations of a few of the individuals on board flight 401 on the night of December 29th 1972. Shown in the pictures starting with the cockpit are Capt. Robert A. Loft (killed), First Officer Albert J. Stockstill (killed), Second Officer Donald Repo (Died 31 hours after the crash), Angelo Donadeo Eastern Airlines Technician (survived). Cabin area were Flight Attendants Mercedes Ruiz, Beverly Repo, Adriana Hamilton and Sharon Transue all (survived), Also shown within the article are passenger's Marin Siminerio and Xiomara Casado who also (survived). 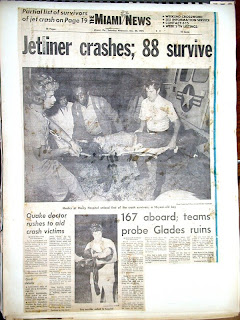 Front page of the then 10 cents "The Miami News" Saturday December 30th 1972 afternoon edition. Main front page photograph shows medics at Mercy Hospital handling a 10 year boy who survived the crash of flight 401. Shown behind the medical rescue staff is yet another U.S. Coast Guard HH-52A Helicopter (side number unknown) from the "MIAMI" Air Station.

Miami, Florida February 14th 2009: One of the benefits in which the Flight 401 Tribute Group has is the talent and experience being lent and brought by Mr. Benny F. Benitez, who at one time during his aviation career, prior to the establishment of his aviation consulting firm, dealt with handling aviation accident investigations world wide for the benefit of Underwriters within and for the Lloyd's of London aviation insurance syndicate. Locating newspaper articles provided from the private collections of the survivors, tapping into NTSB records and historical files and speaking to his group members, the mission is assist the group in establishing a solid set of facts for publication, awareness and for the sake of historical preservation.

Liaising with Miami Herald news reporter Ms. Luisa Yanez, the group hopes to bring out facts that may have been lost or maybe forgotten with the passing of time since the crash 37 years ago. The significant aviation historical value of this accident is that the lost of flight 401 paved the we for what today is the fundamental bases of all aircrews, both civilian / commercial and military training known as Cockpit Resource Management (CRM). The flying public has benefited from this universal and fundamental training of all flight crews. A benefit that started with the significant lost which occurred on the night of December 29th 1972 in the Everglades of South Florida.