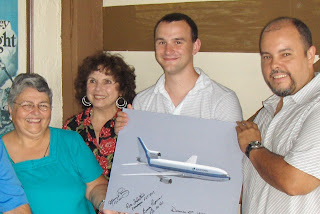 As a sign of the group appreciation, honorary group member Benny Benitez (right) presents Nick with an original digital rendering of N310EA produced by Catherine Smallwood, the Chief Aviation Artist for The Digital Aircraft Factory. The original art work was signed by three of the survivors from Eastern Airlines Flight 401, thus being Ron Infantino, surviving passenger and Beverly Raposa and Mercy Ruiz, surviving flight 401 attendants not present was flight attendant Patty McQuinn of notable mention 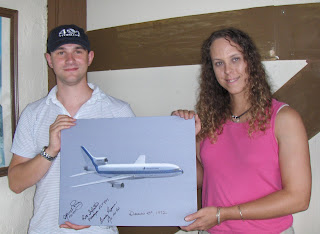 Nick Bavington the recipient of the first ever produced digital rendering of N310EA signed by survivors of Eastern Airlines Flight 401 is shown with the creator of the masterful art work, Catherine Smallwood. The art work measures 16 x20 printed on a canvas panel 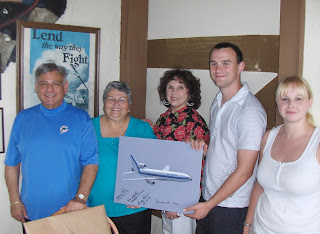 Accompany with Katie, Nick smiles as he poses with the group of Eastern Airlines Flight 401 survivors and his wonderful art print of which he stated that once he gets back home to the U.K., he shall frame this one of a kind print and proudly display it within his home office back in England 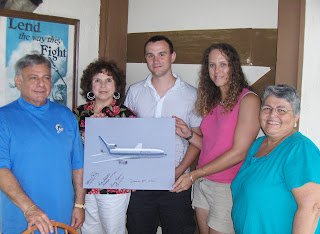 Joined by the Eastern Airlines Flight 401 survivors Ron Infantino, Beverly Rasposa and Mercy Ruiz and the artist of the print Catherine Smallwood. Nick proudly displays his much appreciated gift from the group 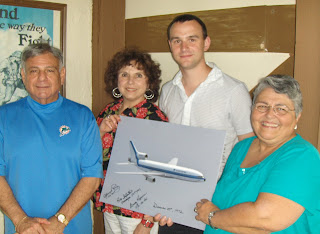 Nick is joined by the survivors from Eastern Airlines Flight 401 who all proudly signed their names to the art print thus making it a special one of kind historical commercial aviation collectible
Miami, Florida 22nd August 2009: In showing their appreciation, the Eastern Airlines Flight 401 Tribute Group presented their Support Representative Member (SRM) from the U.K., Mr. Nick Bavington with a special one of a kind gift. Straight from the production studios of the Digital Aircraft Factory (DAF) a subsidiary of the 94th AeroClaims-Aviation Consultant Group under the creative leadership of Catherine Smallwood, the Chief Aviation Artist for the (DAF) digitally brought back Eastern Airlines L-1011 N310EA.
The digital creation of N310EA will soon become the flagship of the group advertisement and being fully digital, thus created via the Hollywood grade special effect program called LIGHTWAVE, N310EA will be fully animated in flight and will soon visually grace the skies of Miami while flying.
The first official rendering was printed on a 16 x 20 canvas panel and signed by the survivors and given to Nick as a sincere sign of appreciation for his effort toward the cause. In the latter back of the 4th quarter of 2009, posters production of the L-1011 rendering with the signatures of the Eastern Flight 4o1 Tribute Group survivors shall be made available for sale to the public, so as to support the group memorial project.
Nick was delighted and honored to be considered for this one of kind gift. Nick stated that he will proudly display his special gift upon his return to the U.K.
Posted by EAL FLt 401 Tribute Group. at 3:03 PM