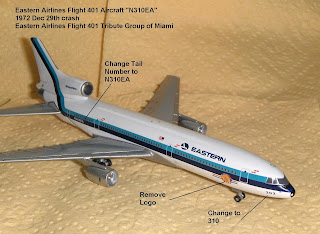 With a slight modification, the Gemini Jets 1/400 shown representing fleet aircraft N303EA could be easily changed to represent N310EA by changing the tail and nose numbers and removal of the forward fuselage circular logo shown 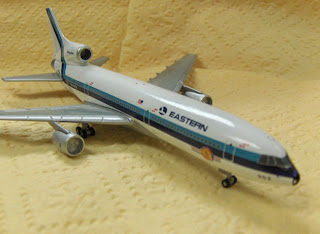 Shown above is a Gemini Jets 1/400 scale die-cast model of Eastern Airlines N303EA shown in the same Eastern Airlines fleet paint scheme in which Flight 401 aircraft N310EA was painted in on the night of the crash 29th December 1972
Miami, Florida 8th June 2009: Utilizing established business contacts within Hong Kong, Honorary Tribute Group member Benny F. Benitez contacted Hong Kong based Hobby-Master a manufacture of fine quality die-cast model aircraft / airliners. Hobby-Master advised that they would not be able to produce the Lockheed L-1011 / N310EA, as they lacked the proper "tooling" and it would prove to be an expensive acquisition to commit to. In their wiliness to help the group, Hobby-Master suggested to contact "Inflight 200" another quality producer of die cast model aircraft / airliners who are in possession of the required tooling. With the help of Mr. Wally Wilson from Washington D.C., Benny was provide with the name and email of Mr. Bob Cass at Inflight 200.

During the same time, Wally Wilson also provided Benny with the name of Mr. Elliot Epstein at Gemini Jets, the manufacture of the L-1011 in 1/400 scale shown above in the photograph. Benny launched a correspondence and was contacted by Gemini Jet who advised that unfortunately, their tooling for L-1011 production was damage, which caused them to produced only a limited run of Lockheed L-1011's. The hope would be for Inflight 200 to assist, which they expressed that normally, they do not produce "accident related" tail numbers, but would make special exception to support the group. Continued dialog shall continued and hopefully soon the Eastern Airline Flight 401 Tribute Group will be able to sell commemorative "Inflight 200" 1/200 scale copies of N310EA.