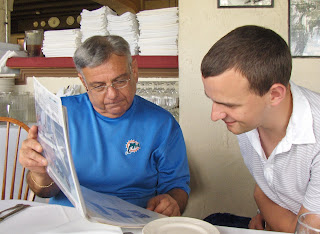 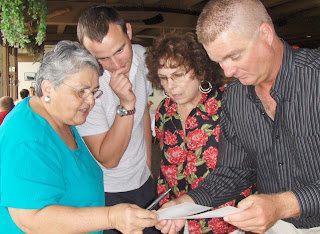 Nick Bavington pays detail attention as Todd Nyman from the Airboat Association of Florida shows Beverly Raposa and Mercy Ruiz, both surviving 401 flight attendants as to the location of currently known and identified Eastern Flight 401 post crash wreckage still out there within the Everglades 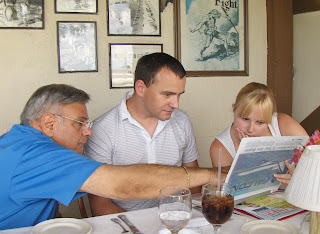 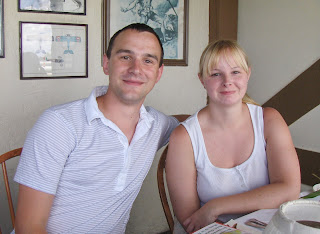 Visiting Miami for the first time and attending the 15th continuous group meeting this year is Eastern Airlines Flight 401 Tribute Group official representative from the United Kingdom, Mr. Nick Bavington and Katie. This meeting marks a high lite within the group, as its officially the first "International" meeting with Nicks and Katie presences. Nick is the Group first official and appointed representative
Miami, Florida 22nd August 2009: Despite the schedule daily rain fall of South Florida, the day turned out to be bright for the Eastern Airlines Flight 401 Tribute Group, as they hosted and met for the first time their Support Representative Member (SRM) Nick Bavington from the United Kingdom.
Nick and Katie visited Miami for the first time as they arrived from Orlando where they were on Holiday. Nick visits allowed the entire group to meet him for the first time since being appointed as the group actual first international (SRM).
Since coming on board with the group back in March 2009, Nick has been instrumental in linking up the Eastern Airlines Flight 401 Tribute Group with the sole military L-1011 operator, the Royal Air Force 216th Squadron based at RAF Station Brize Norton, home of the 216th.
Nick effort also resulted in liaising with Rolls Royce Engine Corporation, this is a key attribute as the famed Rolls Royce RB211-22B powered N310EA. Nick takes the cause across the pond so to speak and will hopefully lead the path for the Eastern Airlines Flight 401 Tribute Group to lecture within the European realm of aviation enthusiast, historians and airlines concerning Crew Recourse Management (CRM) and the experience of the survivors. The whole group was delighted to have met Nick and Katie and thank him for his dedication which is much appreciated! "Jolly Good"
Posted by EAL FLt 401 Tribute Group. at 2:26 PM