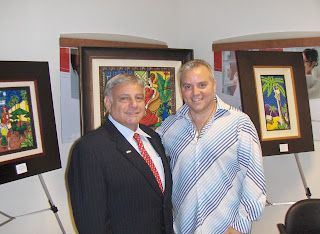 Eastern Airlines Flight 401 survivor Mr. Ron Infantino and Miami based, world renowned artist Mr. George Rodez
Miami Lakes, Florida 19th March 2009: In a meeting arranged and coordinated through Mr. Benny F. Benitez of the the 94th AeroClaims-Aviation Consulting Group a strong and established supporter of the Eastern Airlines Flight 401 Tribute Group allowed group survivor Mr. Ron Infantino to meet and speak to world renowned, Miami artist Mr. George Rodez. http://www.rodezart.com/
In a first ever expansion into "Aviation, Mr. Rodez has agreed to assist the 401 Group by applying his brilliant and vivid style of art work onto cast resin mold, base mounted model of an L-1011 which is being donated by Mr. Roger Jarman of Atlantic Models http://www.atlantic-models.com/ This "One of a Kind" art piece produced by Mr. Rodez shall be auctioned off at a scheduled event to be established later this year with the proceed of the auction going to support the Flight 401 Group. The Eastern Airlines Flight 401 Tribute Group appreciates the assistance and dedication in which Mr. Rodez has expressed toward rendering his artistic talent to help with the group fund raising.
Posted by EAL FLt 401 Tribute Group. at 7:13 PM