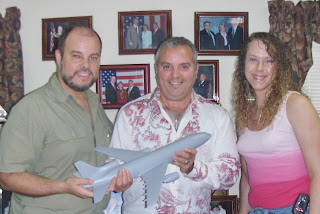 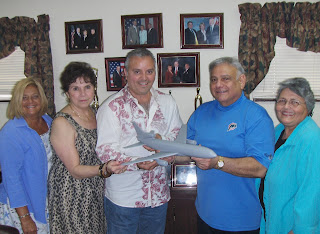 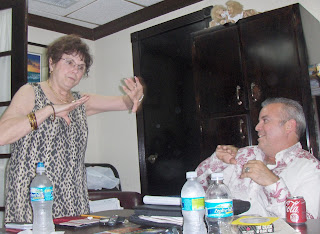 Flt 401 Flight Attendant Mercedes V. Ruiz explains to George Rodez about the attitude of the aircraft as she recalled just before impact 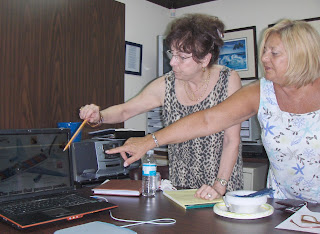 Using an Eastern Airlines L-1011 interior ad from the 1970's Flight Attendants Mercedes V. Ruiz and Patricia Mc Qigg show George Rodez their location within the cabin before the impact 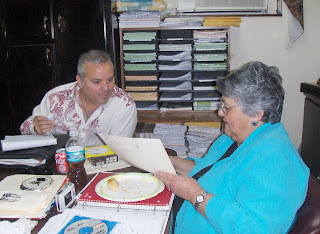 Miami, Florida 28th March 2009: Saturday March 28th marked the 8th consecutive weekend in which the members of the Eastern Flight 401 Tribute Group held their schedule weekend meetings at the offices of Ron Infantino. For eight straight weekends, the Flight 401 Tribute Group Committee got together as they forge ahead with their dedicated project to establish a tribute site / public display for those who died and survived the crash of Eastern Airlines Flight 401 back on 29th December 1972, which forever effected and changed the way in which commercial airline, corporate and military cockpit crews worldwide perform their duties and functions in an operational environment under Cockpit Resource Management (CRM).
The Flight 401 Group has formerly launched its first ever fund raising project by having local Miami Artist George Rodez utilize the 1/100 scale model of the L-1011 as shown above, which was generously donated by Atlantic-Models http://www.atlantic-models.com/ as his canvas to create a one of kind art piece for auction.
Scheduled to support an art expo in Barcelona, Spain next month, George advised that he will commence to work on the L-1011 within the next few days. During the meeting, George expressed many creative ways and ideas to approach this project and advised of enlisting the creative assistance of other local Miami artists to paint a fleet of 1/100 scale model of the L-1011's similar to the one shown above which will then be auction off.
One idea which was spawned from George creative thinking was to have Airlines sponsor the purchase of an unpainted 1/100 scale model of an L-1011 from Atlantic-Models so that the local artists could create their unique art work of which would then be donated for auction to the assist the Flight 401 Group obtain the funds needed to press forth with their vision of creating its tribute site / public display to those whose lives were touched by the lost of Eastern Flight 401 on 29th December 1972.
Posted by EAL FLt 401 Tribute Group. at 3:07 PM