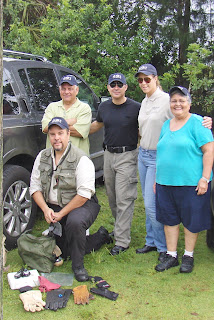 Shown left to right: kneeling, Benny Benitez, Ron Infantino, Al Naranjo, Catherine Smallwood and Beverly Raposa. This event marks the group first formal and organized crash site survey since the group formally assembled at the start of the year and of which many more shall follow as the group goes forth 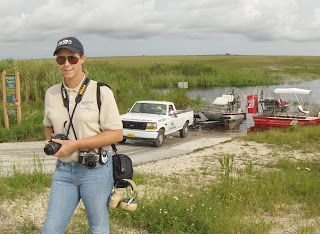 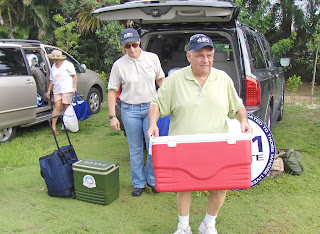 Not to waste one minute so as to seize every second at the site, group leader Ron Infantino begins to unload the provisions to take along for the trip, which mostly consisted of water and soda to combat the heat while out on the site 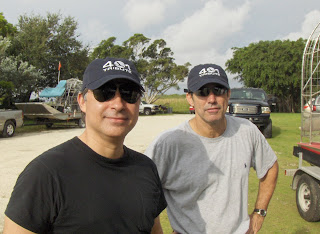 Al Naranjo and Bruce Brockhouse are ready and eager to head out. The trip is very useful to them both, as they will be able to get an idea of the general area as they continue their plans to hopefully establish a memorial at the site 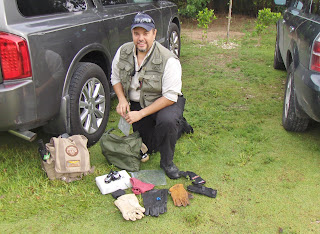 Having been and operated in some the most remote parts of the world while undertaking the survey of aircraft accidents and crashes will in the service of Lloyd's of London and despite being in a "friendly" environment with the support of over eight air boats, direct contact via communication to the Opa Locka U.S. Coast Guard Air Station, Benny still conducts a proper and detailed equipment check for the group before heading out
Miami, Florida 12th September 2009: In a combined effort by all hands of the Eastern Airlines Flight 401 Tribute Group, the group makes ready for their first formal and organized expedition back out to the crash site of 37 years ago, so as to undertake a survey of the area.
One contributing attribute to the group is the experience in which group member Benny Benitez brings in the area of post crash area investigations and surveying.
As a post crash surveyor and investigator in the service of the London Lloyd Syndicate of Aviation Underwriters when being employed for the world known aviation lost adjustment firm, the London based AIRCLAIMS Benny Benitez undertook the survey of over a dozen crashes in the most inhospitable places within Latin America.
Drawing on his experience in planning, safety and executing success sit surveyors, the group benefited from this as they undertook the survey of their crash site. The group hopes to lay the ground work for future public tours that the group would use as means of raising funds for their cause through site visitation and lectures at the site by the survivors.
Posted by EAL FLt 401 Tribute Group. at 10:08 AM