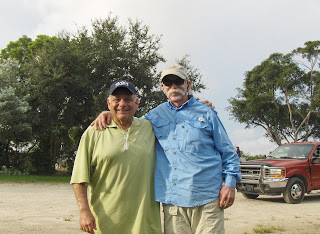 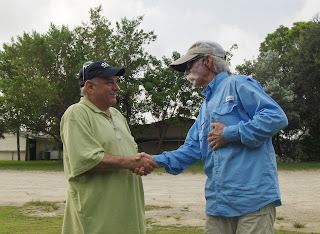 After 37 years Ron Infantino and Don Onstad again meet within the Everglades, but under much different and more hospitable conditions and enjoyed seeing each other after so many years 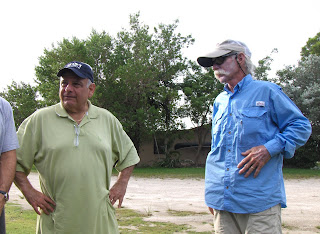 Ron Infantino (left) is shown listing to Keith Price, the President of the Airboat Association of Florida, as unknown to him yet standing next to him is an individual who Ron has not seen within 37 years and who was the Miami-Dade Fire-Fighter who took him off the rescue helicopter. Retired Miami-Dade Firefighter Don Onstad awaits for Keith to finish speak before re-introducing himself to Ron
Miami, Florida 12th September 2009: As it always appears to be with the Eastern Airlines Flight 401 Tribute Group each exploit and undertaking that the group plans and does results in a new and wonderful find. Such is the case when during the preparation of the first organized survey tour back to the crash site of 37 years ago and as the group gathered at the Air Boater Association of Florida grounds, the past met the present.
Much to the surprise of everyone, especially surviving passenger Mr. Ron Infantino, he meets one of the Miami-Dade Fire Rescuer, Mr. Don Onstad.
Unknown to any of us at the time this amazing reunion was a surprise to all and on those magical moments that often happen when around the Eastern Airlines Flight 401 Tribute Group. Both Ron and Don warmly greeted each other and without any words at first spoken, just a hardy handshake and warm smile between them, the sensation of thanks and gratitude was abundant among these two men who fate brought them together 37 years ago.
Posted by EAL FLt 401 Tribute Group. at 7:16 PM