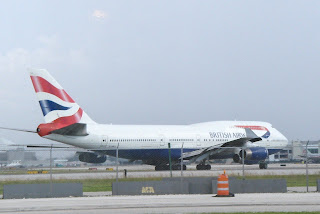 The inner setting within the Miami 94th Aero Squadron restaurant

The restaurant conveys a vintage and rural setting of a European county farm house. The interior walls are superbly decorates with artifact's and images of early military aviation, mostly World War I 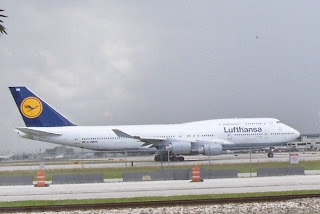 With the fine German precision, Lufthansa B747-400 arrives on schedule into Miami International Airport as observed from the inner dinning are of the restaurant. The table at 94th Aero Squadron restaurant are equipped with audio headsets that allows you to listen into Miami Air Traffic Control
Miami, Florida 22nd August 2009: On Saturday 22nd August 2009, the Eastern Airlines Flight 401 Tribute Group held their 15th consecutive 2009 group meeting as well as their first "International" meeting with the presence of their Support Representative Member (SRM) from the U.K. Mr. Nick Bavington at the famous Miami 94th Aero Squadron restaurant which is situated alone side the South side of Miami International Airport runway 9-Right.
There was no better place and / or venue than the "94th" as its affectionately become known through out the many years by their dedicate and loyal patrons.
The restaurant dinning area has huge side windows that clearly faces (MIA) runway 9-Right. The dining tables are equipped with audio headsets which allows audio monitoring of the local Air Traffic Control communication will you enjoy your meal and drinks. The service at the "94th" is one of super client service. The food at the "94th" is a mix of menu ordered items and / or buffet style at a great value with expectational portions served.
Being that The Eastern Airlines Flight 401 Tribute Group is a Miami grown group and embraces all that is "Miami" the group plans to have their future weekend meetings at the "94th" and utilize their dinning halls for future gatherings and events. So come out to the "94th" on any given Saturday and enjoy a delightful meal, enjoy the sights of commercial aircraft landing at Miami International Airport and have a chance to meet the Eastern Airline Flight 401 Tribute Group members whose experience on the night of 29th December 1972 made air travel that much safer for all us today, 37 years later.
Posted by EAL FLt 401 Tribute Group. at 3:19 PM