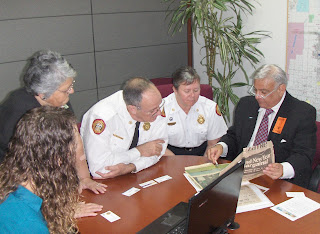 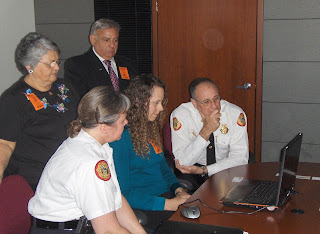 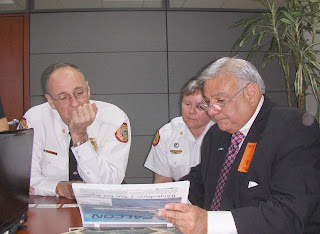 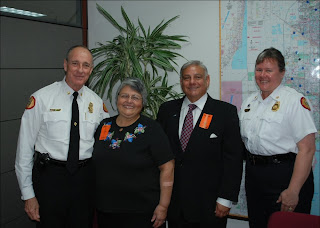 Miami-Dade Rescue Fire Chief Herminio Lorenzo, Beverly Rasposa (EAL Flt 401 Flight Attendant), Ron Infantino (EAL Flt 401 Passenger) and Division Chief Patricia Frosch pictured at Miami-Dade Fire Rescue Headquarters in Doral
Doral, Florida 9th April 2009: The Eastern Airlines Flight 401 Tribute Group Committee, consisting of Ron Infantino (Surviving Passenger), Beverly Raposa (Surviving Flight Attendant) and Honorary Committee members Benny F. Benitez and Catherine Smallwood had the pleasure of meeting Miami-Dade Rescue Fire Chief Herminio Lorenzo and his colleague, Division Chief / Employee & Community Affairs Division, Patricia A. Frosch at their Headquarters located within the Doral area of Miami.
The purpose of the meeting was to formally establish a link between the Tribute Group and the Miami-Dade Fire Rescue Department. The Tribute Group wishes to render the proper reorganization and appreciation toward the Department for the roll in which they played during the post crash rescue of the survivors. On that night Friday December 29th 1972, the Miami-Dade Fire Rescue Department was instrumental in the saving of lives soon after the crash site was located.
Dealing with an isolated crash site within the Everglades, miles away from the City with no established illumination and operating in the shear confusion that often follows a disaster, the established training and professionalism of the Miami-Dade Fire Rescue Department prevailed as they were able to quickly commence the task of rescuing the survivors.
Thirty-seven (37) years later the Miami-Dade Fire Rescue Department has learned from the experience of Eastern 401, the Arrow Air DC-8 crash in the early 90's and Value Jet and today they stand poised, ready, experienced and confident to act at a monuments notice to perform what 37 years might have appeared to have been a nightmare within the darkness of the Everglades.
Today, both the citizen of Miami-Dade County and the endless stream of the flying public which transverse the approach and departure paths of Miami International Airport could be assured that an experienced, well equipped, highly trained group of rescue professional under the guidance and leadership of Fire Chief Herminio Lorenzo stand a vigil ready to perform their duties, the job of saving lives. We at that the Eastern Airlines Flight 401 Tribute Group salute Fire Chief Lorenzo and his troops!
Posted by EAL FLt 401 Tribute Group. at 2:35 PM