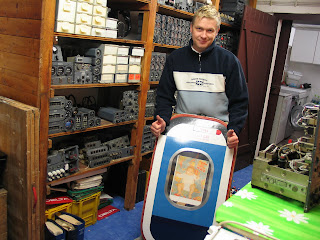 A close observation of Pete's collection on the storage rack behind him show a wonderful array of L-1011 indicator dials, control head panels and what appears items still withing their boxes. Truly and amazing collection of L-1011 parts 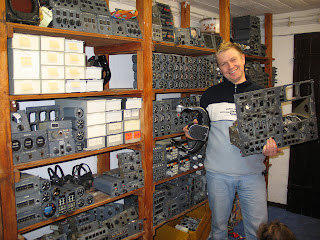 What L-1011 enthusiast in the world today would not be as happy as Pete with all these L-1011 parts in his possession! With his hands full the smile on Peter face says it all. What an amazing collection and dedication to the L-1011 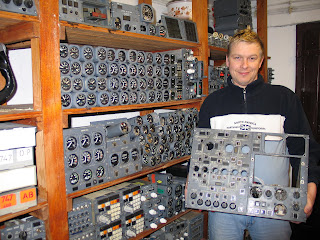 Shown in this picture is Pete holding the section of flight engineers panel that was originally installed on board Eastern Airlines Flight 401, aircraft N310EA, serial number 1011. Peter super generosity will allow the Eastern Airlines Flight Tribute Group to have a piece of their aircraft cockpit,as Peter as kindly offered to donated the panel to the group. Plans are being made for a European airline, preferably Lufthansa to fly the part back to Miami so as to be delivered to the survivors who shall greet the flight upon its arrival into Miami
Wermelskirchen, Germany 2nd February 2010: The Eastern Airlines Flight 401 Tribute Group continuous its international growth and exposure. The 401 group has established yet another presence in Europe. Aside from the group having a presence within the U.K. via Mr. Nick Bavington, the group liaison and contact in the U.K. and into the Royal Air Force 216th L-1011 Tanker Squadron, as well as Rolls Royce, the 401 group has now landed in "Continental Europe" with Mr. Peter "Pete" Trapkowski in Wermelskirchen, Germany.
Pete is an huge enthusiast and admirer of the great Lockheed L-1011. As seen from the above photos. Pete has an amble collection of L-1011 part and we at the 401 group learned that he only photograph about 25% of his collection / inventory of L-1011 parts.
The 401 group is delighted in Pete generous and heart felt offer to donate a section off the flight engineer panel from "N310EA". Pete is a welcome addition to the group and now with two of the group folks in Europe the 401 is truly becoming an international organization.
The Eastern Airlines Flight 401 Group thanks and welcomes "Pete" to the crew!
Posted by EAL FLt 401 Tribute Group. at 4:29 PM