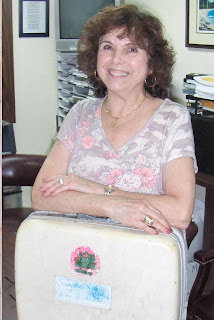 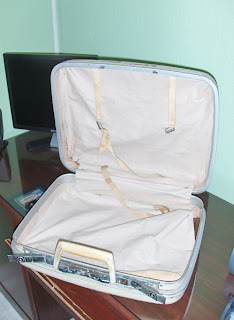 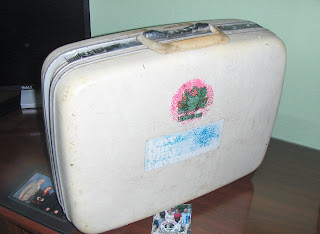 Miami, Florida 16th May 2009: On the night of 29th December 1972, tons of metal within the form of a Lockheed L-1011 aircraft came crashing down into the Florida Everglades. The impact, an explosion, post crash fire and being submerged in the waters of the Everglades, whistle being buried within the twisted, razor sharp and charred wreckage of what was formerly Eastern Airline aircraft N310EA, a piece of Eastern Airline cabin crew issued equipment survives today 37 year later. In a testimony toward the quality and workmanship of the Samsonite Luggage Company, the sole surviving suit case from Flight 401 is shown above.
Well worn, but fully functional, surviving Flight 401 flight attendant Mercedes V. Ruiz, proudly shows off her Samsonite, Eastern Airlines issued suit case. A reflection as to how times have changed, as cabin crews as well as flight crews back then, 37 years ago hauled their personal effects by hand! No sounds of squeaky wheel being generated by roll aways in towed were heard back in those days!
NOTE: The suit case shown above and other surviving artifacts from the worlds first jumbo crash shall be displayed by the survivors of Eastern Flight 401 at this years Airliners International Show in Orlando July 23-25, 2009.
Posted by EAL FLt 401 Tribute Group. at 4:18 PM