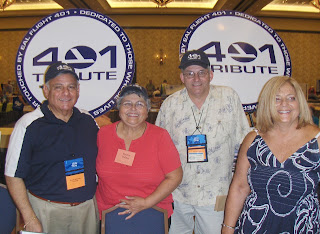 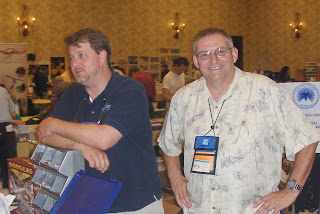 Assuming the "I am in Charge" Captain posed, Captain Chuck Marie is shown at the National Museum of Commercial Aviation table accompanied by Grant Wainscott, Executive Director
Orlando, Florida 23rd-25th 2009: Also in attendance at Airliners International 2009 were members from the National Museum of Commercial Aviation (NMCA). Captain Chuck Marie, Chairman of the board and Grant Wainscott, Executive Director met with the members of the Eastern Airlines Flight 401 Tribute Group and discussed a few possibilities.
One issued discussed was for both organizations to support each other within their respective cities of which Atlanta was an Eastern base and Miami a treasure trove of commercial aviation.
The Eastern Airlines Flight 401 Tribute welcomed the idea of being a possible guess speaker at the (NMCA) scheduled event in September to celebrate the opening of their new and expanded facility in Atlanta to showcase their collection.
Posted by EAL FLt 401 Tribute Group. at 6:58 PM