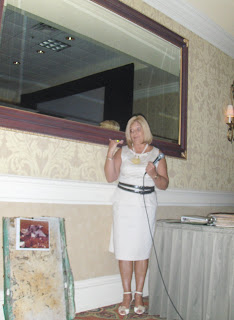 Surviving Flight Attendant Patty McQuigg speaks about her experience before and after the crash of Flight 401. Patty's descriptive approach in telling her story made the audience feel a sense of being there as she explained as to who she was entangled within the many wire bundles and hung there within the wreckage like a scare crow whistle being injured and awaiting for rescue 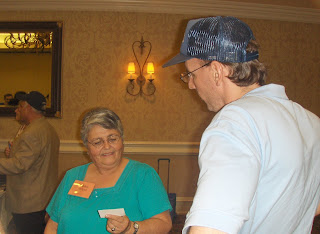 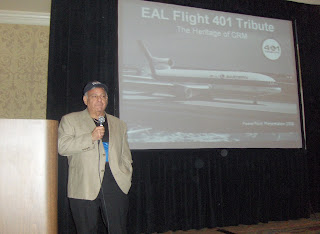 "Commander" Ron Infantino opens the lecture / presentation about Eastern Flight 401 at Airliners International 2009, with the statement of "the 1 to 10 scale factor" of life in as 10, being the worst an aircraft crash to 1 being the least in as breaking a finger nail and as to how in life we all should appreciate every single second and worry about the things that matters 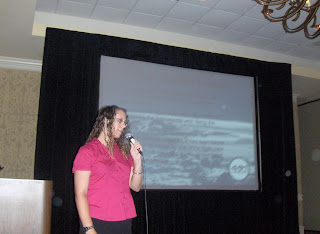 Orlando, Florida 23rd-25th 2009: The Eastern Airlines Flight 401 Tribute Group launched their first formal and structured lecture covering the experience of the survivors, the technical aspects of the crash and the advent of Crew Resource Management (CRM) at Airliners International 2009. An audience of about 60 attendees enjoyed an informative and well presented two hour lecture. The audience participation was tremendous, as many within the audience clamored for answers to the many myths and stories in which they all have heard through out the thirty-eight years since the crash. One former Eastern Line Captain who spoke stated that he heard that the First Officer fell asleep and that was the result of the crash, which amazed the group and proved the point of the many misconception still out there concerning the crash.
The feedback from the audience was one of thanks and appreciation, as many within the audience were layman concerning the issues of Crew Resource Management (CRM) and the technical aspects of the L-1011 of which they commented as to how easy it was to understand the overall presentation. The group all took their turns to present their expertise and experience to the audience each bringing a different and informative view point to the audience.
Ron, Beverly and Patty all shared their personal experience from the crash which captivated the entire audience. The Group have been asked to speak at various other professional aviation gathering through the year of which their scheduled could be seen on the right hand / upper section of the blogsite with the upcoming dates.
Posted by EAL FLt 401 Tribute Group. at 6:51 PM