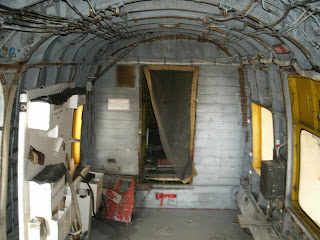 A view of the rear section of the main cabin. Note the wide interior cabin ideal to handle passengers or the storage and transport of rescue equipment on a mission. The rear opening at the rear bulkhead leads into the rear empennage area 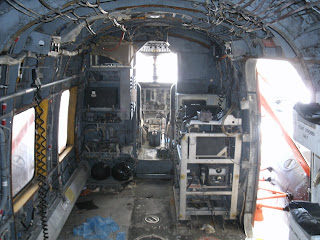 A forward look toward the flight deck with the large cabin door on the right hand side. Note the high interior cabin overhead ceiling where an average height person could stand fully upright. Unlike today EADS HH-65 Dolphin whoes cabin interior area are much smaller and present tight quarters to operate when compared to the Sikorsky HH-52A "Sea Guard" 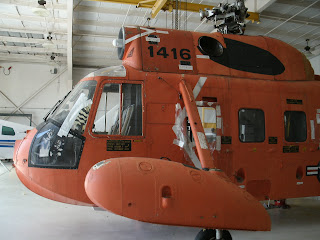 A port forward view of aircraft 1416. Note the large out rigger float pontoon, which houses the left hand main landing gear. Unlike later models of the HH-52A that where U.S.C.G service 1416 was not equipped with pontoon "float bags" 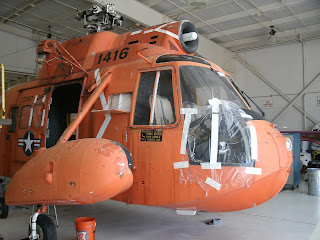 A forward starboard view of aircraft 1416. Note the rescue winch over the main cabin entry door. The rescue hoist was a standard military model capable of lifting 600 lbs. Also seen open aft of the co-pilot window area is the engine access maintenance platform that when close is placed flushed with the fuselage 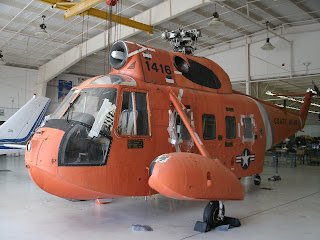 Aircraft 1416 sits inside the Broward Community College aviation maintenance hangar located at North Perry airport. The aircraft is fully complete, as the three blades that make up the main rotor have been removed solely for storage space in side the hangar

Pembroke Pines, Florida 8th February 2010: In their relentless effort to provide the utmost technical information toward the group research concerning all related items that effected the Eastern Airline Flight 401 crash and post crash rescue, support members Benny Benitez and Catherine Smallwood visited and surveyed the only Sikorsky HH-52A in the whole of South Florida. Thanks to Broward Community College, Associate Dean of Aviation Maintenance, Mr. Donnie R. Blalack, Benny and Catherine were given access to carefully examine aircraft 1416.
Despite 1416 not being one of the five HH-52A's that were stationed at Coast Guard Air Station Opa Locka on the night of 29th December 1972, aircraft 1416 is an example of the first HH-52A that was piloted by Lt. Mike McCormack USCG who discovered the wreckage of Eastern Airlines Flight 401. The Sikorsky HH-52A helicopter model played the main role in airlifting both the rescuers to the site and ferrying out the survivors.
The support team plans to bring out the group survivors out to Broward Community College so as to see aircraft 1416, as the last time that Ron, Beverly, Mercy and Patty saw and were around an HH-52A was 38 years ago.
Posted by EAL FLt 401 Tribute Group. at 6:03 PM